> You Know I Am Not There 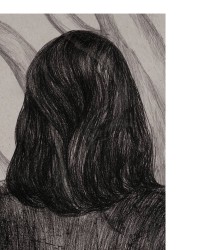 You Know I Am Not There

You Know I Am Not There is a line from the song Know by English singer-songwriter Nick Drake. He was well-known to a small circle of fans in his time and died in 1974 at the young age of 26. When visual artist Danielle Lemaire (Prinsenbeek, 1967) got to know Drake’s music and story she was enchanted. She traced his footsteps, immersed herself in his mystical view of the world, and sought contact with Nick Drake aficionados and fans. Her research and the resulting drawings are brought together in this publication.

In 2020, Nick Drake has achieved true cult status and is now seen as one of the most important singer-songwriters of the twentieth century. His music is a source of inspiration for pop greats such as Paul Weller, Norah Jones, and Sam Mendes and for well-known bands such as Coldplay, Snowpatrol and Radiohead. Many musicians have played covers of his songs. The three records he released are being rediscovered by a new audience again and again. The melancholy of his songs, his premature death and the very rare image and sound material gives his fans plenty of space to imagine the personality of Nick Drake for themselves. For many of them, Nick Drake personifies nostalgic longing for a lost life and a lost world.

Artist and musician Danielle Lemaire takes the visitor with her on her personal exploration of Nick Drake and the beauty and meaning of his music. At the same time, she asks questions about the vulnerability of artists in their pursuit of authenticity, and about the tension between myth and reality. In her work she plays a sophisticated riff on presence and absence, on truth and fantasy.

Exhibition and book
Danielle Lemaire made a new series of drawings and music for the exhibition in the Stedelijk Museum Breda. The drawings are presented in conjunction with letters, photos, moving images, online conversations with ‘Drakeheads’ (fans of Nick Drake) and documents about Nick Drake from her personal archive. The exhibition will be accompanied by a publication in which her archive and drawings are brought together.

Danielle Lemaire
Danielle Lemaire’s work consists of drawings, paintings, photographs, musical works, films, sound performances and installations. She has her own label: Inner Landscapes, on which she releases audio works, books and prints. Her work is about (personal) histories that intrigue her and which she gets to the bottom of, or shows the presence of humankind in an abandoned space or an empty landscape. She thus evokes a longing for timelessness and magic, for something that has disappeared and yet is still tangible.