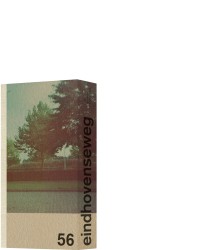 The stories we tell are based on our memories and the objects around us. Documenting is a form of preservation and what is preserved tells a history. These are the traces of an existence.

When the mother of photographer Ton Grote (NL)died in 2007, his father stayed behind in a large house. Their parental home where his parents lived since 1969 and he grew up with his brother and sister. Eindhovenseweg 56, a house full of memories and dreams. When his father started to clean up, Ton Grote decided to photograph all the loose items his parents owned: teapots, old cameras, power strips, glasses and a worn out football. Treasured things they grew up with and the objects his parents used: everything was recorded. The result is an extensive photo archive of more than five thousand photos, a Spurensicherung of real and fictional events.

Eindhovenseweg 56 tells both the personal life of a family and a bigger story. An ode to the life of his parents and his youth, but also an archaeological narrative of a recent history. A voyage of discovery between dream and reality, in which the observer will recognise himself and where their own memories and lost objects are given a new life.