> Debaltsevo, Where Are You? 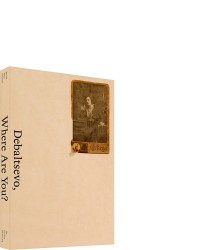 Debaltsevo, Where Are You?

What does it mean when you have roots in different countries? What are the stories that are known and what is there to find out? Debaltsevo, Where Are You? is a personal story about the fascinating and elusive search for your heritage.

Photographer Karine Zenja Versluis (NL) started her own quest in 2013 when she decided to explore her family history in the city of Debaltseve, Donbas, Ukraine. The place where her grandmother was born. Along the way, for more than ten years, everything went differently than expected. The quest became a red thread in the story.

A story told from different perspectives. We follow the history of her grandmother, who was forced to leave Debaltseve (Debaltsevo in her grandmother’s memories) and work in a German labor camp during World War II. We get to know three Ukrainian families who, due to another war, escaped the city of Debaltseve in 2015, and in 2022. And we travel with the narrator herself, from the Netherlands to Ukraine, in search of a city.

During this journey, Versluis asks herself how her grandmother’s story influenced her own life. Constantly overtaken by current events her plans change again and again, symbolizing the puzzling search for her own identity. The work consists of archival images, photographs and texts in English, with an online available Dutch and Ukrainian translation.

About Karine Zenja Versluis
Karine Zenja Versluis (NL) is a documentary photographer and visual storyteller based in Amsterdam. In her work she explores how people deal with their identity, culture and society in which they live and how it influences their daily lives. Karine works with photography combined with audio, video, found footage or text. Her work has been published and featured in various exhibitions and festivals around the world. Debaltsevo, Where Are You? is her third photo book. Karine studied photography at the Royal Academy of Art in The Hague.