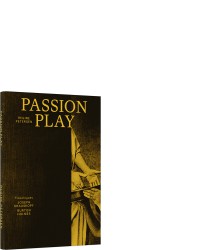 In the 17th century, when the Bavarian village of Oberammergau was struck by the plague, its pious citizens came together and made a covenant with God. If he halted the disease, they would reenact The Passion of Christ every ten years for eternity.

When the deaths ceased, the villagers delivered on their promise. A makeshift stage was erected, and the Suffering, Death and Resurrection of our Lord, Jesus Christ was presented for the first time. The performance, like many others of its era, put the blame for Christ’s agonies on what was considered to be his evil opponents: the Jews.

Three hundred years after its inception, in 1934, Adolf Hitler attended Oberammergau’s special Jubilee. This particular performance is the departure point for Regine Petersen’s (DE) image-text based narrative that unfolds on two parallel levels: that of the world’s most prominent Passion Play and its latent antisemitism, and that of daily life in the National Socialist village.

The reader follows the travelogues of two American visitors – a Rabbi and a travel lecturer – at the turn of the 20th century, alongside historical documents and image souvenirs, such as official postcards of the Play’s main protagonists, local police records and denazification protocols. The artefacts interweave in the form of a continuous tale, while the new rendition undermines their original function and blurs the boundaries between the solemn stage and an atrocious real world.

Orchestrated as an allegorical and at times satirical narrative, Passion Play is a virtuous reprisal of History’s passions for propaganda and populism in their shifting albeit ubiquitous manifestations.

About Regine Petersen
Regine Petersen (DE) is an artist and researcher with photography at the core of her practice. Her work starts with specific and often coincidental findings, which she uses as departure points to gain insight into more universal notions of memory, history, storytelling and ideology.